On October 4, UC Berkeley and BERC hosted the 4th annual Smogathon highlighting the latest innovative air pollution solutions. The event was first launched in 2015 in Poland as a hackathon and has since evolved into an international competition with hundreds of applications featuring real strategies designed to improve air quality and reduce smog.

The World Health Organization (WHO) reports that 7 million people died in 2012 due to causes directly attributed to air pollution. This staggering toll only continues to grow. That is 1 in 8 of global deaths each year. WHO found that 3000 cities around the world are reporting significant air pollution levels.

Smogathon was founded to fight this dangerous global problem by funding top sustainable solutions with cash implementation prizes. Past winners—including companies Kaiterra, Hextio Air, and Airly—have already helped improve the air quality in their communities and beyond.

The North American semi-finals at Berkeley brought together teams from various parts of the U.S. to present their projects to an esteemed panel of judges. The judges evaluated teams on a scale of 0 to 100 and focused on the overall idea and its potential execution.

Two teams advance to the finals in Kraków, Poland in November. Here’s a recap of Berkeley’s semi-finalists and their ideas:

Gas mowers represent 5% of U.S. air pollution, according to EPA statistics. MowGreen is a lawn care business that’s on a “low emission mission” to decrease tons of carbon dioxide produced by the lawn care industry. Electric mowing helps typical New England towns avoid 100,000 tons of emissions per year, which is equivalent to taking about 20,000 cars off the roads, according to the company’s founder.

Ampaire describes itself as revolutionary electric commercial aircraft manufacturer that is ushering in a new era of flight. The company aims to reduce the 800M tons per year of C02 produced by airplanes. Its solution, which includes propulsion battery packs and converted electric airplanes, not only proposes a drastic reduction in emissions, but also lowers the cost of flying. Ampaire is among the roughly 100 airline providers and startups attempting to electrify the airline industry to lower air pollution and carbon emissions. 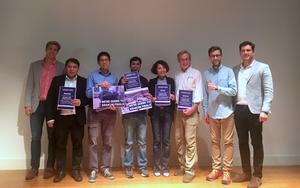 The use of biomass for power and heat generation is projected to grow significantly in the next decade. Takachar created small-scale, decentralized biomass upgrading in rural areas where it’s otherwise the norm to just burn the biomass. Takachar has created a low-cost small-scale portable system that converts biomass at its source to reduce CO emission by 95%. The solution not only puts money back into local hands, but offers a practical solution for a cleaner global supply chain.

Indrio Technologies aims to “stop smog at the source” through real-time emissions control in vehicles and chemical processes in manufacturing. Its laser-based chemical sensors were developed at Stanford and have already received pre-seed funding. Indrio aims to transform the measurement of gasses to reduce smog and measure pollutant outputs more effectively and efficiently.

GerWeiss is a first- and last-mile ride-sharing solution that aims to replace the 60% of vehicle trips that are currently 5 miles or less. With a sustainable EV ecosystem that includes EV tricycles and vehicle charging stations, GerWeiss attempts to fill the transportation gap city by city, and ultimately get high pollution-emitting vehicles off the road. It caters to developed countries through public partnerships at the government level, and also developing countries where transportation is limited.

Congratulations to both Takachar and Indrio Technologies who were selected by the judges to advance to the finals in Kraków, where they will be up against other semi-finalists from São Paulo, London, New Delhi, and Beijing. Good luck at the final competition, and thank you Smogathon for allowing BERC to help reduce air pollution and smog around the world. 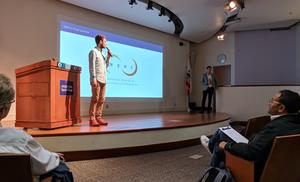 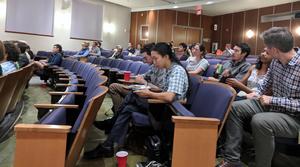 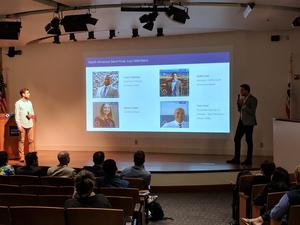